Is there a place for african Languages online?

That was the big question that the POWO November Meetup was set to tackle.

POWO (Poets and Writers Online) is a blogger community for those in creative writing aimed at bringing the Poets and Writers together both online and offline through meetups that happen every 2nd month at Nairobi’s tech Hub- the iHub.

This month, the POWO team set out bring the discussion of languages to the fore by engaging the linguists from both the academia and from the streets – literary.

The discussion line up of boasted of the  learned and the linguists from English, Kiswahili and French with performances by poets in Gikuyu, Dholuo and Sheng.

Below are some of the salient points picked from each of the speakers on this often ignored issue of language and more so, the use and future need for African Languages especially now that the World is becoming digitized.
– It should never be lost on those writing or performing in local or indigenous languages that translation should NOT kill your initial message or composition.

He is an Associate Professor of French  at the United States International University. He is also a Martial Arts trainer. He has taken a keen interest in Sheng with his current research being on the Evolution of Sheng from 1945 – 2011.

During the panel discussions, Prof. Iraki made a bold prediction that in 50 years’ time, Kenya’s Dominant languages will be English and Sheng

He also challenged  us (humans) not to force languages onto the different countries & cultures across Africa. His comments were; ” We have seen different ethnic groups lose their identity but never willing to speak in the preferred language”.

Prof. Iraki also noted that  some of the now established languages e.g. French were ‘Shengs’ of Latin & have evolved into acceptable languages.

Although Keguro should be correctly referred to as Dr. Keguro. He is not keen on the titles unless which his Freshman University students.

Keguro joined the panel for the 2nd part of the discussions which focused more on the use of  and need for African Languages in the Online Space. Being a seasoned blogger himself, he shared his insights both as a blogger and a teacher.

His thoughts were that most of the languages that are currently wildly spoken were forced upon us, English & French were imposed on Africans who were not asked whether or not to speak these languages.

She is a true linguist who speaks in fluently in :- German, French, English and Kiswahili. She is currently learning Gikuyu, Spanish and Sheng. She runs the blog ManenoMatamu.wordpress.com and has a true passion for African Languages. She is also a Global Voices French translator and has  seen.

Having settled in Nairobi recently from Tanzania, her opening comments were that Kenyans have ‘Massacred’ Kiswahili according to Tanzanians. She has since learnt that the Kiswahili spoken in Kenya is quite ‘different’ from the same spoken in Tanzania.

She informed the audience that Chinese Mandarin has also been forced upon large parts of the population in China, contrary to popular belief that they are one big united front.

Prof Kithaka Mberia:
Currently has 4 Anthologies of Poetry all written in Kiswahili and translated into English. He is an Associate Professor in department of Linguistics and African Languages at the University Of Nairobi.

Prof. Talked of a paper he wrote on the death and rebirth of African Languages which stirred quite an interest from the Audience. He is currently publishing this in a book to be published soon.

Kelvin J.
Jamaa wa Sheng as he was often fondly referred to is one of the forces behind sheng.co.ke which is one of the products under Go-Sheng Services company.

He informed the audience, much to their amazement, that Go-sheng translated the adopted Kenyan constitution into sheng renaming ‘Katiba Mbichi’

He also talked about how sheng.co.ke was born from an actual experience of ‘the dog ate my homework’. The founder, Dunkie, had written many sheng word in an exercise book only for his dog to rip it into pieces. He had to come up with a better way of keeping an archive of the words and thats how the site was born.

Kelvin pointed out that the will be a  Stability and continuity of Sheng. She got  its mass appeal when marketing & brand managers started to use it in billboards, TV adverts and mainstream media for their new products. Words like Bankika, Dosika, Bonga points and Bamba have become mainstream terms yet they are in Sheng.

Keguro answering a question from the audience

Some Points picked in the Q &A Session:

– In the US alone, there are 100 universities teaching in Kiswahili.

– Comments: Demographic of those who are online are usually young and urbanised. The Sheng that is available in different areas is not the same. The Sheng has also metarmorphosised into many formats.

– While doing translation for those in the rural areas, let’s not patronise those who are intended to be part of the forums

– Adaptation of the dialect when & if one has to speak the language at a certain area e.g Eastlands compared to Kileleshwa

It was noted that there is added value in translation, not just for economic needs as most thought.Translation enables many people who would ordinarily not read or enjoy a book written in a local language own it whilst still being able to grasp the context.

POWO organising team wishes to thank all the panelists who made a huge contribution to this important debate, one that continues to play in the minds of creative writers. We hope to make the POWO meetups the platform where Creative writers can grow in their craft.

Watch some of the moments captured by our photography crew 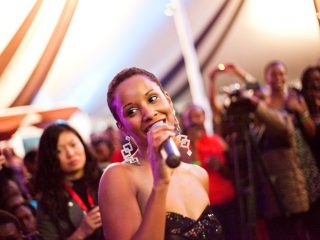