The Good, The bad, The Kenyan

Theatre Review: The Good, the Bad and the Kenyan
Reviewed by Faith Oneya

If there is anything that Heartstrings Kenya has a flair for, then it is for expertly playing on Kenyan stereotypes as is evident in the most recent show that promised to “shutter our guts”. If the reaction from the audience is anything to go by, then the production lived up to its promise.

In characteristic style, the play begins with a narrator, this time the able Allan Weku, who regales the audience with hilarious anecdotes of being Kenyan. Of particular note is his narration of his internet dating experience, a story delivered so expertly to an appreciative audience that one cannot help but conclude that this man has carved a style that works for him despite having to fill the role previously played by the larger than life Larry Asego and the seasoned thespian Obilo ‘Mkame’ Ng’ongo.

In the first scene, we see Kenyans at a funeral where women and men alike come to show off (cars, clothes) and eat. One after the other, the actors recount funerals they have been to where there was good food…or where there was not and even go on to discuss what people would eat at their own funerals! Paul Ogola (who also plays the role of a father, teacher and a husband) carries this scene and impeccably delivers punch line after punch line, constantly leaving the audience in stitches.

As the different scenes unfold and the style of using Kenyan stereotypes gains currency, it becomes evident that the play is not just about stereotypes. The directors of the play offer the audience an opportunity to laugh at themselves while reflecting on the deeper meanings of the ridiculous scenes borrowing heavily from contemporary Kenyan societal ills: From rotten politics, to the increasing suicide rates, unscrupulous preachers , corruption among Kenyan policemen, strikes and youth unemployment.

The set of the play, in true improvisation theatre style that Heartstrings subscribe to, is devoid of any elaborate props, with the most being a table and chair one corner, which the narrator uses from time to time. The set also benefits from an eager cartoonist who uses chalk to draw freakish cartoon characters on the walls of the stage. Different catch phrases on the cartoons in keeping with the ‘Kenyanness’ theme.
Other noteworthy performances in the play come from Humphrey Maina (who also acts in a local TV production ‘Papa Shirandula’ and Paul Ogutu. Humphrey plays the roles of a father, a hustler and a preacher effortlessly and Paul Ogutu puts on convincingly hilarious Luo and Kisii accents first as a ‘hustler’ and then as a school boy.
If you are looking to unwind and laugh your head off or ‘shutter your guts’ this weekend, then this is the play for you.
Directed by : Sammy Mwangi and Victor Ber
Conceptualized by : Dan Ndambuki aka Churchill
Venue: Alliance Francaise
Times: Weekdays 630pm. Weekends 3pm & 630pm
Charges; 500/
TICKET SUPER HOTLINE: call 0721608656 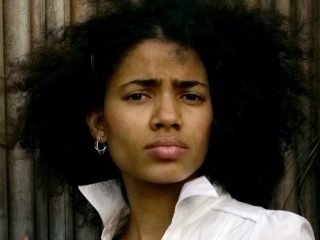