This review almost didn’t see the light of day due to the backstage on goings that seem to have taken precedence of the Nneka Nairobi concert as seen in the online space with many overlooking a very important observation that I made.

Despite virtually no mainstream media publicity save for the Capital website and Cind Ogana’s Rapsody show, Nneka’s show managed to pull such a crowd that it was virtually impossible to move around without bumping into someone. I think it’s safe to boldly say that Social Media in Kenya has reached a critical mass level where a good number of people can learn about and attend an event through blogs, facebook and twitter.

Laura has done an excellent review of the event thus I will not regurgitate the splendor in Nneka’s performance to the same level, I did however, as a fan, feel that I did not get the Nneka that I wanted on that stage.

Maybe I should have seen the signs when, during her press brief, she mentioned that she only came with 2 band members. I must have overlooked the fact that they would have to play an acoustic set, something that Vivian Green also did as I came to learn from Chris Bitok’s tweet that night. For those of us who were dying to hear her sing Africans live, it seems Nneka had other plans in mind – learn her new songs instead. This seemed to work because ‘Heartbeat‘ from her latest album is a work of art. The Acoustic version, was interestingly, quite soulful.

I decided to check out her live performance videos online and interestingly, she does prefer acoustic sets of her music in most of her live performances. I guess it makes alot of sense for fans to be able to appreciate the music more in a different, more soulful version.

We learn something new everyday, don’t we!

The sound arrangement did at one point get drowned out. I suspect that the organizers had not expected such a turnout as only the ‘dance floor’ near the stage had good sound. To counter this, the sound engineers tried increasing the volume but this was a bad idea as it distorted. Thus the ‘late-comers’ had to contend with the feeling of being in the same venue with Nneka albeit without hearing her.

Nneka’s concert was a new experience for me though it made me yearn for her full band performance at Sauti za Busara. I just need to rob a bank first!

Big props to the Goethe Institute particularly Yohannes and Barbara and to Blaze of Spark Africa for giving us a moment with one of the most important young musicians to come out of Africa lately.

I Almost forgot, the initials VIP now mean Vagabond In Power, so next time you insist you want a VIP ticket or VIP treatment…………… 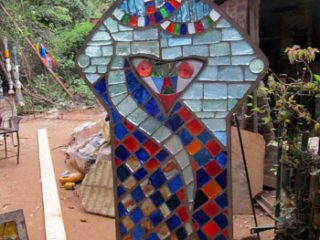