Last month, I turned 40. As I marked this day, I did what most people approaching 40 do, I looked back at my life and asked myself “did I take the road less travelled and has it made all the difference?”

Just like Robert Frost, when the two roads diverged for me, I took the road that tugged at my heart the most and thus began my journey into poetry, a road that I journeyed on now for 17 years.

What started off as a pastime to help me make sense of the world around me, became a soundtrack that has continued to hum throughout my life.  Words that gave me the courage to express my innermost feelings and thoughts have shaped my career and opened doors into worlds I could only imagine.

No matter how far off I wandered,  all my life’s paths have always led me back here to poetry, to words, to writing.

As I pause to capture the moments that made it all worthwhile, I feel more self-assured about where this path leads me.  begin to make bolder strides into new

Imposter Syndrome: A wordsmith who sometimes let words burn out while others spew out undone

There is no other poem that captures my foray into poetry like Wordsmith.

It is said that change is the only constant in life
Like I, a wordsmith who is still learning how to use the fire in her tongue like fireflies or young dragons
I, a smith who sometimes let words burn out while others spew out undone
If only my words could be the sun chasing the moon into hiding
And be the only constant in this ever-changing life
Like a compass, my words would constantly indicate the four poles, the direction that our society is taking.

Although I was young, bold, outspoken and full of belief that the world needed to hear my story and those whose voices could not be heard, I had the eagerness of a puppy. So quick to get into writing and performance even when I had no idea what I was doing. In my first anthology Mines & Mind Fields; My spoken words were raw, unconventional, daring, curious, and unapologetic.

When I read those poems now, I sometimes find myself cringing at how I spewed out so many words when they were half cooked. For some, I let them burn for too long.  That book was pure experimentation at how to let a poet run before they can walk.

When the book was published in 2010,  it became the genesis of my imposter syndrome. I felt like I had cheated the world that I was a poet, even had the book to show for it but deep down inside, I didn’t have what it took to be a good poet.

I didn’t think I  deserved to be mentioned with the same breath as the African poetry greats such as David Rubadiri, Marjorie Oludhe Mcgoye or contemporaries such as Tony Mochama, Lebogang Mashile or Warsan Shire.

When Dr. Tom Odhiambo informed me that he would be using my book to teach contemporary Kenyan poetry in his class, I was tempted to ask him not to. I didn’t think I deserved to be taught in schools, let alone at the University of Nairobi. I was still hung up on the belief that my poetry was more for the streets than it was for academia. I felt like such a fraud.

It’s the same feeling that haunted me even as I attended the literary festivals, open mic sessions and events on stages that welcomed me with open arms.I have often been told that it’s those vulnerable moments of self-doubt that make artists continue to better themselves out of the belief that they are not good enough. That need to constantly prove that their first work was not a stroke of beginners luck is where authenticity hides. With time, although I have developed my voice, style and niche, I still hold them like water on an arrowroot leaf.

The first poems I wrote explored the themes of identity and language. These themes have continued to play an important part not just in my poetry but in my life. Although the self in my identity does not change, with time, I have grown to occupy many roles.

In 2010, I became a wife and a mother soon after. Because poetry is about very deep emotions and personal experiences, these roles have trickled into my work, sometimes to the chagrin of my loved ones who felt I was letting on too much.

My fascination with the power of language and the first tongue I learnt, Gikuyu, continued to stay with me. From very early on, I became deliberate about writing poems in my mother tongue. . That yearning to be authentic and true to my roots has not only kept me grounded, but it has also become the soil upon which I now confidently walk into a new world of Children’s poetry, the new chapter.

The next phase: Becoming a Children’s poetry writer

Picture books, storybooks, colouring books and illustrated books. That has been our life with our 3 children for the last 10 years. They have grown up on and around books.

It was during those moments of bedtime story readings, visits to the libraries and our visits to bookshops that I began to notice how few children’s poetry books written by African authors were.

Think back to your childhood days and try to remember a nursery rhyme. It will most likely be little Miss Muffet,  Humpty Dumpty or the cow that jumped over the moon. I believe in the power of questioning and re-imagining our present. What would it take to have our own Dr. Seuss whose poems and stories reflect the life and realities that our children are growing up with?

For the last 2 years, every visit to the library on weekends with our children was an opportunity to mull over the possibility that I could and should try writing poems for children. Five manuscripts later, I am slowly walking my mind back to my childhood to imagine worlds full of magic where words are simple, rhymes just roll off the tongue and rhythm makes everything sing along.

On July 6th 2011, I launched the Kenyan Poet podcast. This was a show where I got to feature and engage Kenyan creatives on various art & cultural matters. It was a first of its kind in Kenya and soon became an extension of the KenyanPoet.com blog which I had been running since 2005.  We, Phares Kariuki (Skipper) and I  had a good run, 10 episodes of pure experimentation.  I am forever grateful to Skipper for offering his time, studio and skills as the producer, mixer and sound engineer for the first season.

The break is over and I am excited to be coming back into this space that has since come of age.

As I kick off Season Two, am grateful for the support by EUNIC Kenya through the Wasanii Waomoke fund. I’ll be doing things a bit differently from season one. A lot has changed in those 10 years and the African creative space has exploded.

African creatives are finding their voices and asserting their agency through a new digital, connected, and virtual world that cuts through intermediaries and gatekeepers. By using their voices, hands and bodies to imagine, mould and create their own reality, their work and expressions are cutting through intermediaries to reach across all divides as they forge a new identity, a new narrative and a re-imagined history about what it means to be an African.

I look forward to engaging some of the most prolific and outspoken African creatives, thinkers, makers, and builders for candid conversations about weaving their own thread in Africa’s new identity.

The KenyanPoet podcast is where we explore the intersection between technology & new media with creative expression, culture & heritage in Africa.

Look out for it at your favourite podcast platform.

40 sounds like a good place to start things over with more experience and with less fear of being judged. 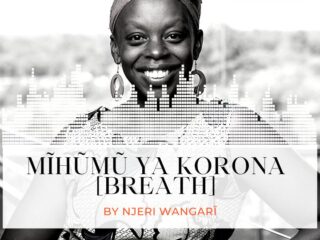 Previous Post (p) Inside Wants out; Writing a Gikuyu Poem & Featuring in An African Poetry Podcast 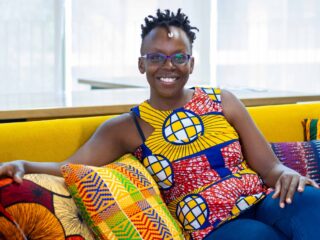