While attending the North Sea Jazz festival last year(held at the Kasarani Sports complex) we were promised of better things to come this year in march.

At a press conference to launch the journey to the 2007 event, the organizers pointed out that their wish list for stars to grace the event include Youssou N’Dour, the legendary Osibisa, Miriam Makeba and others. They have formed a committee that will suggest more names. They will start booking the artists in August and they will have a 50—50 percent input of international and local participation.

It is now towards the end of February and it looks like our friends at the Sarakasi group, promised more than they could deliver(talk of broken promises).

It looks like the more organised organisers have their priorities wrong as they successfull manage to co-ordinate perfomances by the likes of Shaggy(making school kids become suicidal), Ja-rule and Coolio. (are you seeing the trend here, western music which comes aloong with all other western influences.

Celtel has been doing a great job in bringing African griots to perform in Nairobi(I went for the Yossour N’dour perfomance. So has Alliance Francaise( They brought Angelique Kidjo last year, They will be hosting Lionel Loueke (a master guitarist, Benin Born who infuses West African Rhythms with Jazz)at the Maison gardens. The performance will be on friday from 7pm, charges are 500 each)

Maybe Celtel & Alliance Francaise should take up the mantle of organising world music and Jazz events in Kenya.

In the mean time, I think instead of waiting until our event organisers style up we should be looking elsewhere for live performances eg. Next years’ Mali festival(it happens each year and its becoming more popular among world music lovers).

I’ll leave you with the a video of the just concluded festival. Enjoy 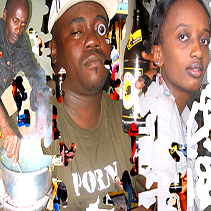